Eventually There Are No More

"Life is a never ending to do list."
Susi Bocks 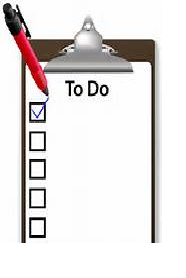 It really is. Even for those who aren't list makers like me, we all have daily tasks and they will not end until people physically expire. Showering, dragging a toothbrush across your teeth (hopefully more than once in your life), eating and eliminating; all of it must be done. If you are not doing at least these things, you aren't living or at the very least you're not very hygienic.

I like having lists to follow. It feels like the end of the day is a good one when every item I entered on my calendar and in my notes has been completed. Most people don't get that same satisfaction, but it still is true that life really is a list of its own; one for you to accomplish as many things as you can before you go.

My wish for you is that you fill your lists with many worthwhile events to experience along with the monotonous ones. Make those exciting ones your priority and I'm guessing you'll slide into the end zone of your life with a big smile on your face instead of just awaiting its eventual approach.

"Creating beautiful movements is often quite a clunky journey.
You have to be very open and honest with the other person."

Reminds me of emotional relationships. They also require going through some awkward stages in order to perfect a beautiful solidarity, along with riveting and endearing moments. It is all only achieved through openness and honesty.
Posted by Susi at 3:50 PM No comments:

Email ThisBlogThis!Share to TwitterShare to FacebookShare to Pinterest
Labels: relationships

The Unease In The Loud... The Calm in The Quiet

Not always achieving it.

All I want is tranquility... peace... and quiet.

Shutting it all out now, opening up into another realm of consciousness...

Intentionally, purposefully and driven to achieve a deep level of down-time for my sanity.

The focus on serenity, on relaxation, listening to the whispers of quieting nature takes me there.

Welcome back all the pieces of me strewn about, put back whole inside of me now.

The soothing quiet lifts me buoyantly and gracefully to a place of gentle stability... mind and body connecting once again. Unease replaced by the calm in the quiet... strength restored.

Becoming a parent, I took my duties seriously to be there for my kids, whatever the situation. Their comfort, their health, their happiness (although I'm not responsible for it, I hope I contributed to it), their well-being - it was all what I was responsible for while they were under my care. My birth plan included their successful transition from a tiny human being inside of me to a full grown adult out in the real world. I was responsible for them being the best individuals they could be our society and preparing them how to use the knowledge I imparted while they were under my care.

When my kids were young, I knew bad things could happen to them. And they did. I prepared to deal with every crisis and be the support they needed to get through. And I was. For every bruised knee and scraped arm they dealt with; band-aids, care and kisses made them all better. A bucket, Tylenol and a heating pad were ready for those times when riding it out was really the only thing going to make their illnesses better. For all the things they encountered, I was there. And I always will be.

The most horrifying thought that they might die before me is something I've given some thought. My opinion, my gut feeling and my intentional reflection took me to places that were emotionally charged on the one hand, but also to a space that offered a rational acceptance of that possible event. And I vacillated mightily between the two states of mind.

I've said publicly that I would lose my way a little and my reality would never be the same while adamantly proclaiming everyone has tragedies, they deal... I deal... especially now more than ever before... so, it will be hard, but it will eventually be OK. Even while consciously, although privately, running scenarios to be mentally prepared for it, I still didn't know how I would really deal with the possibility that I might survive my kids. It is a daunting reality to have to accept and one I'm not sure that I'm really able to process.

Don't misunderstand, I'm not worrying about the eventuality of this type of an event. It's just a thought that periodically crosses my mind, and especially when I see friends having to deal with this situation. I see their pain and I wonder to myself, as a human, how would you respond?

I've come to the conclusion that I just don't know how I will handle that situation. No one really does until it actually happens to them. Predictions or reflections about what it will mean to me or anyone are fruitless. One thing I do know, for that very reason, is why I'm scared about death not reaching me before something truly awful happens to my kids. The big what if? scenario. That's really where all my fear is coming from. Knowing that I don't know if I will make it through without my kids and what my quality of life will be should it happen. It is a pretty scary prospect to imagine a world without my kids in it.

So for my own sanity, I will do my best not to be inquisitive and leave it alone. Peace is the objective, so fear does not have a place in my thought process. Inquiry into the unknown for better understanding, sure. But senselessly torturing of yourself with a scenario or imposing a reality into a situation that might not happen just doesn't make any sense. And I'm all about making sense of things.

I'll just leave it at possible anguish to come. In the meantime, though, I will be entirely grateful that they are here in my world and my visit isn't over yet.
Posted by Susi at 1:23 PM No comments:

Susi
These things I am...Old & wise, young & still learning. Also, beautiful inside & out and ugly... only occasionally. Really working on that part.